Organelles are micro-organs with specific morphological structures and functions in the cytoplasm, also called pseudo-organs or substructures. The plastids and vacuoles can be distinguished under a light microscope, and other organelles generally need to be observed with the help of an electron microscope. Organelles are generally considered to be microstructures or micro-organs that have a certain shape and function in the cytoplasm. However, there are some different opinions on the scope of the term "organelle". The organelles in the cell mainly include: mitochondria, endoplasmic reticulum, centrosome, chloroplast, Golgi apparatus, ribosome and so on. They form the basic structure of cells, enabling them to work and function normally. 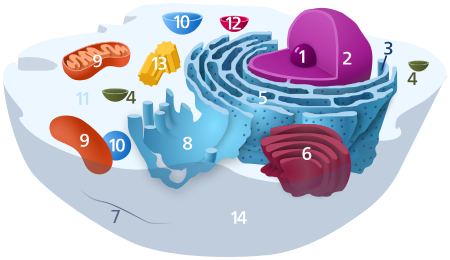 Although most cell biologists consider the term "organelle" to be synonymous with "cell compartment", the space is usually combined by one or two lipid bilayers, but some cell biologists choose to restrict the term to include only Those cell compartments that contain DNA. Derived from previously autonomous micro-organisms obtained through endosymbiosis.

According to this definition, there will be only two major types of organelles (ie, organelles that contain their own DNA and are derived from endosymbiotic bacteria):

Mitochondria (in almost all eukaryotes)

Plastids (for example in plants, algae and some protozoa).

It is also suggested that other organelles have an endosymbiotic origin but do not contain their own DNA (especially flagella-see the evolution of flagella).

American cell biologist K. R. Porter observed the cells cultured in vitro with glutaraldehyde fixation with a high-penetration high-pressure electron microscope before discovering a microbeam network in the cell matrix. So the matrix is divided into two parts: ① microbeam network, distributed throughout the cell, composed of protein-based microbeam fibers. ② Water-like cyberspace, in which a variety of small molecules such as sugar, amino acids, inorganic salts are dissolved or suspended. The edge of the microbeam network is attached to the plasma membrane of the cell, and interweaves with cytoskeleton components such as microtubules and microfilaments to form a network frame, supporting endoplasmic reticulum, mitochondria and other organelles. Free polysomes are suspended at the intersections of the microbeam network. The entire cytoplasm presents a complex structural order.

Some people first treated the cells with detergents to remove soluble proteins, and then used a modified water-drying method to prepare cell specimens. Microbeam structures were not visible under an electron microscope. Without a detergent treatment, a microbeam network appears. Therefore, it is uncertain whether the microbeam network really exists.