Rhodamine is a related family of dyes, a subset of triarylmethane dyes. They are derivatives of xanthene. Important members of the rhodamine family are rhodamine 6G, rhodamine 123, and rhodamine B. They are mainly used for dyeing paper and inks, but lack light resistance. 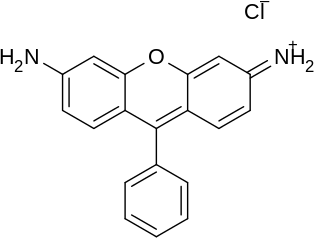 In addition to their main applications, they are often used as tracer dyes, for example. Determine the speed and direction of water flow. Rhodamine dyes fluoresce, so they can be easily and cheaply detected using an instrument called a fluorometer. Rhodamine dyes are widely used in biotechnology applications such as fluorescence microscopy, flow cytometry, fluorescence correlation spectroscopy and ELISA. Rhodamine 123 is also used in biochemistry to inhibit mitochondrial function. Rhodamine 123 appears to bind to the mitochondrial membrane and inhibit the transport process, especially the electron transport chain, thereby slowing internal respiration. It is a substrate of P-glycoprotein (Pgp) and is usually overexpressed in cancer cells. Recent reports suggest that rhodamine 123 may also be a substrate for multidrug resistance-associated protein (MRP), or more specifically, MRP1. They are used in some lasers. In addition to its main application, rhodamine is also used as a gain medium for dye lasers. 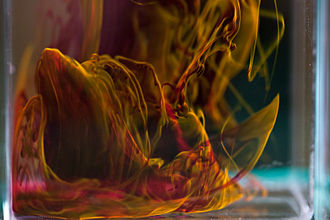 2. The complex is fluorescent. Reacts with lipids to produce purple on a pink background.

There are many rhodamine derivatives used for imaging purposes, such as carboxytetramethylrhodamine (TAMRA), tetramethylrhodamine (TMR) and its isothiocyanate derivatives (TRITC) and sulforhodamine 101 ( Its sulfonyl chloride forms Texas Red) and Rhodamine Red. TRITC is a basic rhodamine molecule (-N=C=S) functionalized with an isothiocyanate group, replacing the hydrogen atom on the bottom ring of the structure. This derivative is reactive to amine groups on intracellular proteins. The succinimide ester functional group attached to the rhodamine core forms NHS-rhodamine, forming another common amine-reactive derivative. Other derivatives of rhodamine include newer fluorophores such as Alexa 546, Alexa 633, DyLight 550 and DyLight 633, HiLyte fluor 555 HiLyte 594, Janelia Dyes JF549 and JF669 have been tailored for various chemical and biological applications, In these applications, higher light stability, increased brightness, different spectral characteristics or different accessory groups.