Fluorescein is an organic compound and dye. It exists as a dark orange / red powder and is slightly soluble in water and alcohol. It is widely used as a fluorescent tracer for many applications. Fluorescein is a fluorophore commonly used for microscopy, a dye laser as a gain medium, used to detect potential blood stains in forensics and serology, and used in dye tracing. Fluorescein has the maximum absorption at 494 nm and the maximum emission in water is 512 nm. The main derivative is fluorescein isothiocyanate (FITC), which is 6-FAM phosphoramidite in oligonucleotide synthesis. The color of its aqueous solution changes from green to orange depending on the observation method: by reflection or transmission, as indicated by the bubble level, for example, fluorescein is added to the alcohol filling as a colorant in order to increase the visibility of bubbles contained therein (thus improving the instrument Accuracy) while designing the tube. Solutions with higher fluorescein concentrations may even appear red. It is the safest and most effective medicine in the health system in the World Health Organization's Essential Medicines List. 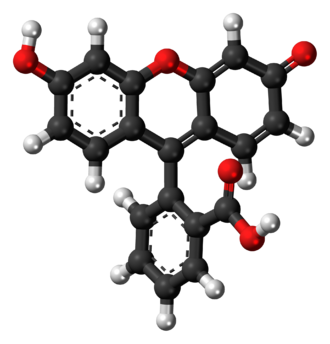 The molecule's fluorescence is very strong; peak excitation occurs at 494 nm, and peak emission occurs at 521 nm. Fluorescein has a pKa of 6.4 and its ionization equilibrium results in a pH-dependent absorption and emission range of 5 to 9. Moreover, the protonated and deprotonated fluorescence lifetimes are approximately 3 ns and 4 ns in the form of fluorescein, which can be determined by non-intensity-based measurements. Time-dependent single-photon counting or phase-modulated fluorescence can be used to restore life. Fluorescein has an isotonic point at 460 nm (equal absorption for all pH values). 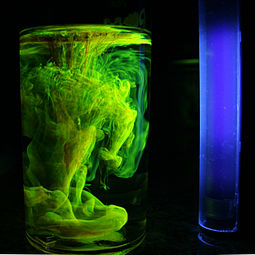 In cell biology, isothiocyanate derivatives of fluorescein are commonly used to label and track cells in fluorescent microscopy applications (such as flow cytometry). Additional bioactive molecules (such as antibodies) can also be attached to fluorescein, allowing biologists to target fluorophores to specific proteins or structures within the cell. This application is common in yeast displays. Fluorescein can also be coupled to nucleoside triphosphates and incorporated into probes enzymatically for hybridization in situ. As shown at the bottom right, the use of fluorescein imide allows one to synthesize labeled oligonucleotides for the same purpose. Another technique, called molecular beacons, uses synthetic luciferin-labeled oligonucleotides. Fluorescein-labeled probes can be imaged using FISH or targeted by antibodies using immunohistochemistry. The latter is a common alternative to digoxigenin, and both are used to label two genes in a sample.

Sodium fluorescein is a sodium salt of fluorescein and is widely used as a diagnostic tool in ophthalmology and optometry. Local fluorescein is used to diagnose corneal abrasions, corneal ulcers and herpetic corneal infections. It is also used in the fitting of rigid breathable contact lenses to evaluate the tear layer under the lens. It can be used as a sterile disposable pouch containing a lint-free paper applicator soaked in sodium fluorescein. Intravenous or oral fluorescein is used in the study of fluorescein angiography, and is used to diagnose and classify vascular diseases, including retinal disease, macular degeneration, diabetic retinopathy, intraocular inflammatory diseases and intraocular tumors. It is also increasingly used during brain tumor surgery. Diluted fluorescent dye has been used to locate multiple muscular ventricular septal defects during open heart surgery and confirm the presence of any residual defects.