Texas Red or sulforhodamine 101 acyl chloride is a red fluorescent dye used for histologically staining cell specimens and sorting cells using a fluorescence-activated cell sorter for fluorescence microscopy and immunohistochemistry. Texas Red fluoresces at approximately 615 nm, and its absorption spectrum peaks at 589 nm. The powder is dark purple. The solution can be excited by a dye laser tuned to 595-605 nm or a less efficient excited laser at 567 nm. The absorption extinction coefficient at 596 nm is approximately 85,000 M-1 cm-1. The compound is usually a mixture of two monosulfonyl chlorides, as shown in the figure, or with exchanged SO3 and SO2Cl groups. It can be used as a marker for proteins, and conjugates can be easily formed through sulfonyl chloride (SO2Cl) groups. In water, the sulfonyl chloride group of the unreacted Texas Red molecule is hydrolyzed to form a sulfonate, and the molecule becomes sulforhodamine 101, which is very soluble in water, and is easily washed out. 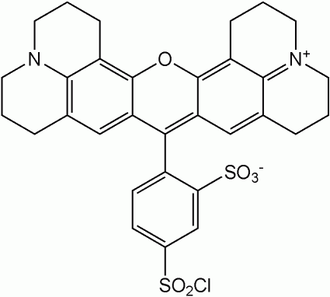 This is one of the advantages of conjugation with Texas Red compared to the use of rhodamine-isothiocyanate conjugates. The protein linked to the Texas Red chromophore can itself act as a fluorescent labeling agent; a fluorescently labeled antibody will bind to a specific antigen and then display the location of the antigen as a bright spot when irradiated. It is relatively bright, so it can be used to detect weakly expressed antigens. Other molecules can also be labeled with Texas Red, such as various toxins. The dye has very good solubility in water and other polar solvents (such as dimethylformamide, acetonitrile). Texas Red attached to DNA or RNA strands can be used as a molecular beacon that highlights specific sequences of DNA. Texas Red can be linked to another fluorophore. Tandem conjugates of Texas Red and R-phycoerythrin (PE-Texas Red) are often used. Fluorophores (such as Texas Red) are commonly used in molecular biology techniques, such as quantitative RT-PCR and cell analysis. New rhodamine derivatives (such as Alexa 594 and DyLight 594) are customized to match the excitation and emission spectra of Texas Red and are used in a variety of chemical and biological applications that require higher light stability or higher fluorescence intensity.