Feulgen staining is a staining technique discovered by Robert Feulgen that is used in histology to identify chromosomal material or DNA in cell specimens. It's dark. It depends on the acid hydrolysis of the DNA, so the use of strong acid fixatives should be avoided. Place the sample in warm (60 ° C) hydrochloric acid and then in Schiff reagent. In the past, subsequent sulphite flushing was performed, but this is now considered unnecessary. Alternatively, the sample can be counterstained with light green SF light yellow. Finally, it was dehydrated with ethanol, removed with xylene, and fixed in a resin medium. DNA should be stained red. If counterstained, the background is green. Feulgen reaction is a semi-quantitative technique. If the only aldehyde remaining in the cell is the aldehyde produced by the hydrolysis of DNA, the technique is quantitative for DNA. An instrument called a micro densitometer or a spectrophotometer can be used to actually measure the pink Feulgen response intensity of a given organelle. Using this program, early identified interphase cells were composed of two populations, those with diploid DNA and those with tetraploid DNA (two complete genomes). The nucleus looks the same, but one nucleus contains twice as much DNA. Based on the synthesis of additional DNA, this led to the phase division of the cell cycle into G1, S, and G2 phases. 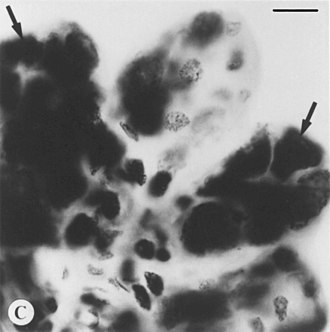