BODIPY, short for boron dipyrrole methylene, is an organic single and double bond compound of interest as a fluorescent dye. BODIPY consists of dipyrrole methylene complexed with a disubstituted boron center (usually BF2). The IUPAC name of the BODIPY core is 4,4-difluoro-4-boron 3a, 4a-diaza-s-indenotetraene. Due to instability, unsubstituted BODIPY dyes were not prepared until 2009. 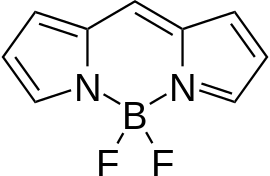 BODIPY dyes have been fully studied. Most BODIPY dyes have a small Stokes shift and are relatively chemically inert. Fluorescence is quenched in solution, limiting applications. This problem has been solved by synthesizing an asymmetric boron complex and replacing the fluoro group with a phenyl group. BODIPY dye is famous for its unique small Stokes shift, high, environment-independent fluorescence quantum yield. It is often close to 100% even in water, has clear excitation and emission peaks, and contributes to overall brightness. It has high solubility in many organic solvents. The combination of these qualities makes BODIPY fluorophores promising for imaging applications. In solvents with different polarities, the positions of the absorption and emission bands remain almost unchanged because the dipole moments and transition dipoles are orthogonal to each other. 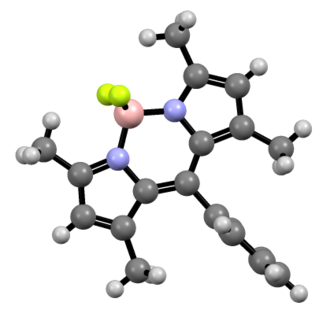 BODIPY is prepared by treating a dipyrromethene precursor with a boron trifluoride etherate in the presence of a tertiary amine. Dipyrrolidone can be obtained from suitable pyrrole by several methods. Usually, one of the α-positions of the pyrrole used is substituted and the other is free. In the presence of TFA, this pyrrole can usually be obtained from Knorr pyrrole synthesis, which is condensed with an aromatic aldehyde to give dipyrrolemethane, which is oxidized to dipyrromethene using a quinone oxidant such as DDQ or p-chlorobenzoyl. Alternatively, dipyrrolidone is prepared by treating pyrrole with an activated carboxylic acid derivative, usually an acid chloride. Asymmetric dipyrrolidone can be obtained by condensing pyrrole with 2-acylpyrrole. Intermediate dipyrrole methane can be isolated and purified, but the separation of dipyrrolidone is often impaired due to its instability.

Due to the high tolerance to pyrrole and aldehyde (or acid chloride) raw materials, BODIPY core has rich chemical composition and various substituents. The nucleus has a form negative charge on the boron atom and a form positive charge on one of the nitrogen atoms. Boron atoms can also be post-functionalized to exchange fluorine atoms for strong nucleophiles, such as lithiated alkynes or aryl species. Using succinimide reagents (such as NCS, NBS, and NIS), the hydrogen atoms at the 2 and 6 positions of the cyclic core can be replaced by halogen atoms, so that the palladium coupling reaction with borate, tin reagents, etc. can be performed Post-functionalization.