Allophycocyanin is a protein from the phycobiliprotein family, as well as phycocyanin, phycoerythrin, and phycoerythrin. It is a secondary pigment of chlorophyll. All phycobiliproteins are water-soluble, so they cannot exist in the membrane like carotenoids. Instead, they aggregate to form clusters on the membrane, called phycobilisomes. Phycocyanin absorbs and emits red light (maximum 650 and 660 nm, respectively) and is easily found in cyanobacteria (also known as blue-green algae) and red algae. Phycobilitin pigments have fluorescent properties for use in immunoassay kits. In flow cytometry, it is usually the abbreviation of APC. For effective use in applications such as FACS, high-throughput screening (HTS), and microscopy, APC requires chemical crosslinking. Phycocyanin can be isolated from a variety of red or blue-green algae, each of which produces slightly different molecular forms. It consists of two different subunits (α and β), each of which has a phycocyanin (PCB) chromophore. The subunit structure of APC has been identified as (αβ) 3. APC has a molecular weight of 105,000 Daltons. 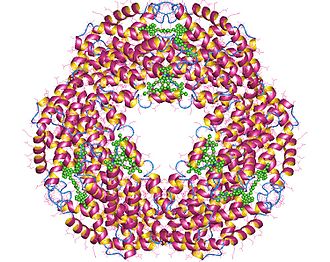 Many applications and instruments have been developed specifically for allophycocyanin. It is commonly used for immunoassays by time-resolved fluorescent fluorescence energy transfer (TR-FRET) analysis, such as FACS, flow cytometry, and high-throughput screening, as a Euro receptor.