Alcian Blue is any member of the family of multivalent basic dyes, of which Alcian Blue 8G has historically been the most common and reliable member. It is used to stain acidic polysaccharides, such as glycosaminoglycans in cartilage and other body structures, certain types of mucopolysaccharides, sialylated glycans of cells, and the like. For many of these targets, it is one of the most widely used cationic dyes for optical and electron microscopy. Historically, Arsin Blue has been a popular staining method in histology, especially in light microscopes with paraffin-embedded sections and semi-thin resin sections. The portion of tissue specifically stained by this dye turns blue to blue-green after staining and is referred to as "basophilic" (compared to "eosinophilic" or "Sudanophilic"). Alsin blue staining can be used in combination with H & E staining, PAS staining and van Gieson staining methods. Alsin blue can be used for quantification of acid glycans in differential spectrophotometric quantification in solution, and for staining glycoproteins in polyacrylamide gels or Western blots. Since the 1960s, biochemists have been using it to analyze acidic polysaccharides in urine to diagnose diseases such as mucopolysaccharidosis, but from the 1970s, partly because of the lack of Alcian use and partly because The length and tediousness of the process necessitates the development of alternative methods such as dimethylmethylene blue (DMB or DMMB) methods. 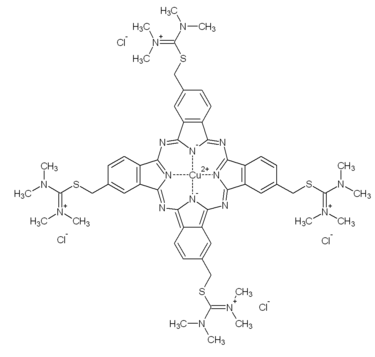 Solid arsine blue is a greenish black (sometimes dark blue purple) crystal with metallic luster. The aqueous solution was bright green blue. Although the compound arsine blue itself is unstable (see Stability below), the resulting stain is stable and lightfast. 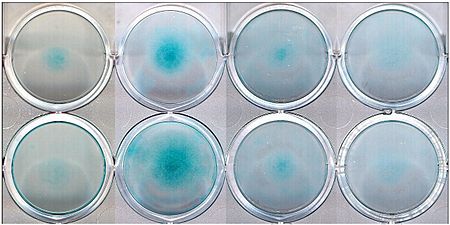 Maximum absorption is affected by aggregation

In the aqueous solution, a large number of Arsin blue molecules accumulate into very large micelles that are too large to even be dialyzed. Therefore, it has a maximum absorption at ~ 600–615 nm, even at a fairly high dilution, which is actually not the maximum absorption of the dye monomer, but the maximum absorption of the polymer. Since the absorbed light has an orange-yellow spectrum, transmitted / reflected light is perceived by our eyes as a slightly greenish blue or cyan complementary color. In the aqueous solution, Alcan blue is discolored even when the molar concentration is one hundred percent of the molar concentration of toluidine blue, which is the primary color. There are only small steps in the absorption curve of monomer dyes at 670–680 nm representing monomer dyes, which are usually a few dyes and become less in the presence of salts (<108M). However, when the solvent is DMSO (aprotic solvents with a moderate dielectric constant), Alsin blue does not aggregate and a large monomer absorption peak can be seen well. When using a solvent (such as ethanol) (or a mixture of ethanol and water) as a vehicle or a nonionic detergent (such as Triton X-100) to make exogenous micelles, a similar spectral shift similar to longer monomer peaks is also observed shift. 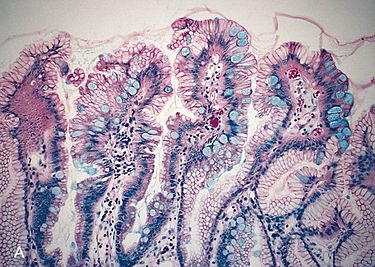